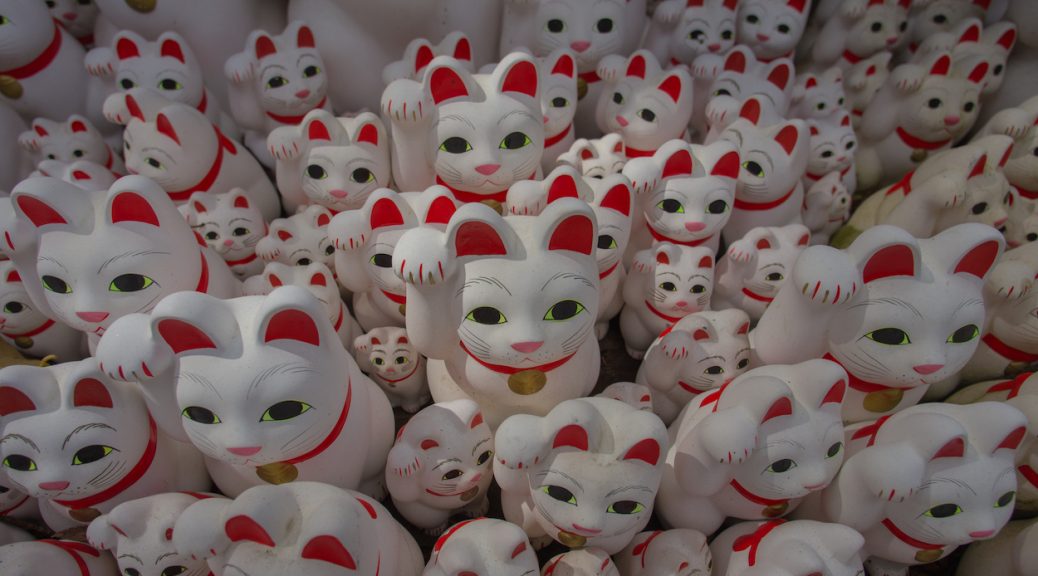 ….but mostly underground and mostly lost! I was far more competent the previous day on a bike!

I left late around 10.30, after some tea with a chap from the States and a Kyoto recommendation from a Japanese master of tea ceremonies and artist, and ventured underground….

My mistake was of not distinguishing between the subway and non-subway lines on the map, which led to some extensive walking between lines and losing the trails across the stations, which are simply enormous.  Eventually after a longish walk overground, I finally reached Gotokuji cat temple, which was very restful.  The shop sells little cat icons of varying sizes and consequently there are hundreds outside, crowded on racks to one side of the shrine.

After a tram, a train, and subway ride I reached Shinjuju Gyoen around 3pm for coffee and matcha green ice cream.  These gardens are extensive and very attractive, and the green house very well laid out and beautifully stocked.  It was a lovely way to spend a few hours – in daylight!  Homewards, I wandered into Shinjuku admiring all the neon lights and managed to mis-time the subway for rush hour.  I dismissed two trains as I simply couldn’t get on, then was collectively supported by my fellow passengers for two stops.

I re visited Senso-ji and spent some time playing around with timed photographs, since there were few people there.  A young Japanese man was doing the same and I offered him my tripod, and then felt a rather silly as he had the latest all singing all dancing Sony camera, so of course had no need, but we swapped pleasantries, he was curious about what brings visitors to Japan.