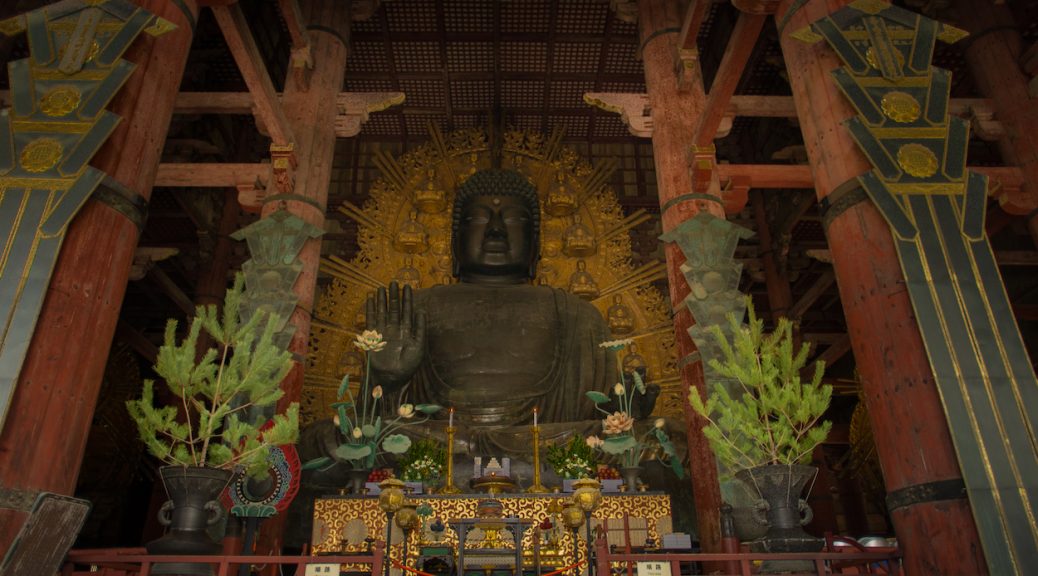 Another early start in order to get the train to Nara Park, and so worth it to beat the crowds.  We were able to view the enormous statues within Great Buddha Hall, Todai-ji, in relative peace and to soak in the atmosphere.  Japan is used to regeneration, often owing to fire or earthquakes and this building is no exception.  The wooden structure was last rebuilt in 1709 and until 1998 was the largest wooden building in the world, despite being 30% smaller than the building it replaced!  The giant statue (at 15m tall and weighing 500 tonnes) was originally finished in 751, although there have been recastings over many centuries.

As the bus loads started to pour in we headed outside for a little deer bothering.  They were very tame and gentle; the slightest crackle of anything though, their ears pricked up and noses turned to bags or pockets in hope.  From the deer, we visited Yoshiki-en Garden.  This is free for foreign tourists and less popular, but a rather sweet garden and for us, quiet was great.

Nara is where you can watch traditional mochi being made and it has become a bit of a spectacle at Nakatanidou shop, with the makers pimping their synchronised mallet performance with some karate chops and appropriate sound effects!

On the way back to Arashiyama we stopped at Kyoto station to book some seats for travel for the next few days and to add to our collection of station stamps.   These ink stamps are at tourist attractions and stations and are a rather nice graphic thing to collect, but I was rather sporadic, collecting only really at stations.

An earlyish night with some sake and a ‘pot noodle’ ** at the hotel, a brief plan for the next couple of days and then a bag re-organise and bed in the ‘posh hutch’.

** As an illustration of eagerness to help and adherence to protocol, the receptionist saw that I couldn’t use the hot water jug for my noodles and practically ran over to assist.  She then came back a few seconds later armed with cling film, which she placed over the pot to replace the foil lid I had discarded. She then advised I had to wait three minutes exactly, synchronised watches and repeated the precise time I was to remove the film!  To be fair, she had my measure, as soon as she saw I couldn’t work the water jug…