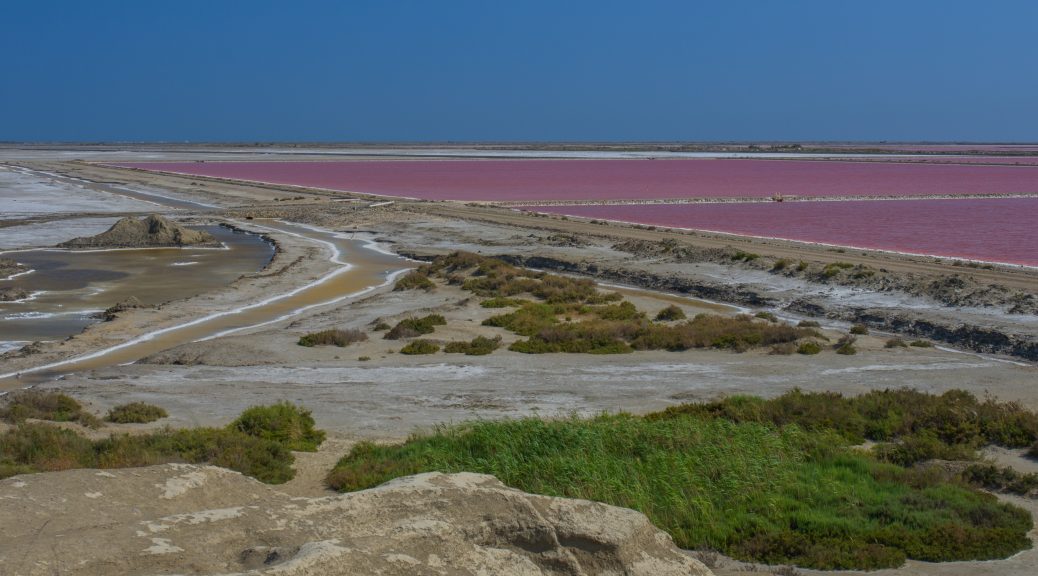 Our stay in the Camargue was at beautiful Gîtes du Mas du Moulin in Mas Thibert, with the very hospitable Carole and Patrice, and their menagerie of goats, chickens, sheep, horses, dogs and of course donkeys.  Manon et Antoine produced Charlie a month ago and he is the apple of his (human) parents’ eyes!

Carole explained that true Provencal donkeys have the cross of St Andrew on their backs… along with heaps of very soft baby donkey hair.  If only there had been room in the car for him!

For details of the gite, take a look at their page Gîte du Mas du Moulin

There is plenty to see in the water and wetlands of the Rhône Delta, or Camargue; from the pink lakes of the salt pans and their pink inhabitants, to the Spanish bulls and horses (of which the wild ones remained elusive).

The ‘Mistral’ wind was a constant during our stay and was welcome for its cooling properties and for keeping mosquitoes at bay – sort of. Mas du Moulin was originally a wind generated mill and built to both harness and protect.  With such consistent wind it’s very popular with kite and windsurfers and a special canal has been built in which surfers set world speed records.

Sunflowers and vines bask in the heat and light.  Van Gogh stayed in Arles in 1888 and painted sunflowers in the area.  Perhaps less well known is that the Camargue also produces around 5% of Europe’s rice.