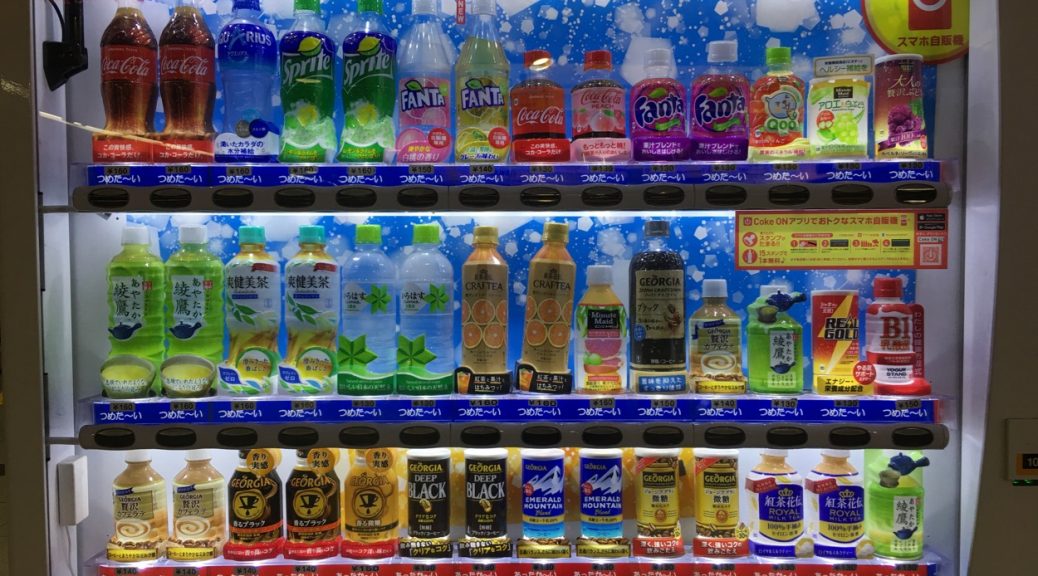 A brief stopover in a very windy Schiphol Airport, Amsterdam, allowed me to peruse the cheese and tulips for which Holland is renowned, although the landing was a very dumpy rollercoaster ride, with lots of whoops and urghs.

What they say does seem to be true however and travelling hand baggage only really does speed things up.  I was first at the desk to exchange my voucher and collect my Japan Rail Pass after landing at Narita Airport in Tokyo.

On the platform waiting for a subway train to Asakusa, I encountered my first vending machine and bought a hot coffee in a screw top can.  ‘Georgia’ is a brand from Coca Cola and seem to monopolise takeaway drinks in Japan, yet I’ve never seen anything like it in the UK.

I managed to find Bunka Hostel very easily and was slightly bemused when it was full of salsa dancers drinking beer, with lots of photos being taken and a proper party atmosphere.  I couldn’t check in, so they looked after my bag while I went out to explore.

On the way out the hostel receptionist handed me lucky dip tickets for the stand just outside and I won some little wrapped sesame bites, a blue flannel (Japanese ladies carry these to dry their hands in public toilets), a 1000¥ voucher for a local shop, which I gave to the receptionist and some sashimi – two raw tuna fillets, which they kindly put aside for me for later!

I’d seen the entrance to Senso-ji on my way to the hostel, so meandered back that way.   It is a huge Buddhist temple and Tokyo’s oldest.  It was packed with families enjoying a sunny Sunday afternoon and there were lots of youths parading in traditional dress, possibly some kind of debutant style thing maybe?  Lots of them being run around in rickshaws.  It was lovely just soaking up such different sights, sounds and smells on a glorious afternoon.

I ended my day by sharing the sashimi with a few of the staff in the hostel, after it had emptied of revellers, then crashed out in my hardboard enclosed, bottom bunk ‘hutch’.