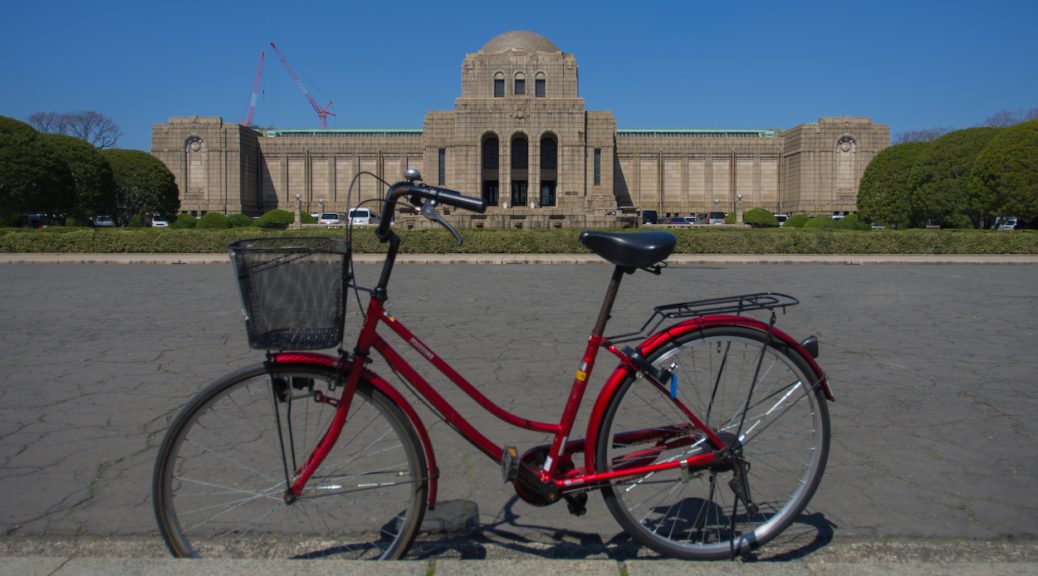 I felt pretty refreshed in the morning, considering.  The Asakusa metro station is just around the corner and so it turns out is a bike hire office.  Thus, at 0730, ‘Fromage’ and I set about getting acquainted…for eleven and a half hours!

I headed for Ueno Park and at the entrance were two cherry  trees in full blossom.  There appeared to be a ‘KitKat’ photo shoot taking place, making the most of some beautiful reflected highlights from a nearby building and then it suddenly got busy.  Onward through Ueno and the traditional toilets, to Nezu Shrine, a red and gold building gleaming in the morning sun.  This has a number of torii gates set within an Azalea garden above a carp pond and is a very peaceful setting.  With preparation for the Olympics and Rugby World Cup, work was being carried out to a large section of it however.

From there toward Shinjuku and the trendy boutiques to Meiji Shrine which was busy with many foreign tourists.  Walking or cycling ensures that you get more off the beaten track and I happened on a few religious sites; a buddhist cemetery and an Inari temple with foxes with red ‘clothing’.

The Government Buildings provide an amazing viewing spectacle and despite not reaching there til early afternoon, the snow capped summit of Mount Fuji was visible.  The Olympic and Paralympic flags are currently on display there too, along with the Tokyo logo and mascots.   Since I am not au fait with the rules, I thought that parking next to another bike meant it should be ok, but no.  I had what could have been a parking ticket when I got back. A lady who asked me for directions wasn’t able to translate, but said she didn’t think it was a problem and tore it up and took it with her.  Problem solved!

I started to head back around 2.30 ish and aimed for Shibuya, to experience the busiest crossing in the world; I walked it and rode it I am happy to say.  From there, to Hie Temple with monkey statues and very striking flags or banners of red and turquoise each side of the steps and torii gates to the top.   Onward then past the Imperial Palace Garden, as the sun dipped and the city lights properly took effect, to the food markets just before Ueno station.  Here I stopped for a hot sweet bean paste donut type thing in the food market, bustling with tables and tables of locals eating and making merry, behind swathes of polythene protecting them for the elements.  Then back across to the hostel.

All in all, my circuit was probably only around 20 miles, on very flat terrain thankfully as Fromage had no gears.  Not wishing to take any chances however, I pretty much went straight out again to the local onsen across the road and down a back alley.   There is a lot of etiquette involved with the Japanese hot baths and so I had to watch and learn, or rather wash and learn.  Pretty much you take your shoes off and put them in a locker in the foyer, then pay your money via vending machine.  Go through into the changing room, where you put all your clothes into a locker, then through into the showering area armed with soap, a flannel, a small plastic stool which you sit on and a washing up bowl.  I had to glance across occasionally to a lady who’d entered the onsen at the same time, to make sure I followed all this in a suitable timescale.  She scrubbed herself all over, had a thorough sluice down and then started again, complete with hair wash, probably taking around 15 minutes!  Only once you are absolutely squeaky clean can you then enter the large square baths running along one wall, below a tiled depiction of Mount Fuji.  This was bliss, but after a day outside, I turned beetroot fairly promptly and clearly didn’t have the stamina to stay in the piping hot waters for long.